Our quote form typically takes less than 14 seconds to complete

Find out what makes us tick, what goes on behind the scenes and what's important to us in designing your school ski trip!

Whistler comprises two interlinked mountains: Whistler and Blackcomb. Skied together these trails provide just over 8,000 acres of skiable terrain with more than 200 marked trials, equally divided across both mountains. This is the largest ski area in North Anerica, beating the second placed Vail by a not insignificant 54%, and makes it ideal for our school ski trips.

One of the most surprising charateristics of a resort with the highest footfall of skiers and boarders annually is that there are hardly any lift queues. This is due to some very high speed lifts that operate seamlessly into an effective grid across the mountain.

This mountain has a summit of 2184m (lift served) with a siginficant vertical drop of 1530m. In itself, Whistler Mountain offers a huge 4800 acres of skiable terrain and employs 20 lifts to bring schools up to the trails and restaurants. In 1997 the Peak 2 Peak Gondola finally joined the mountain with neighbour Blackcomb Mountain.

Blackcomb has a high point of 2240m and a larger skiable vertical at 1565m. Being slightly narrower than Whistler mountain, Blackcomb provides 3414 acres for our 321 school ski trip groups. In total, Blackcomb has 20 lifts with the majority being high speed quads. 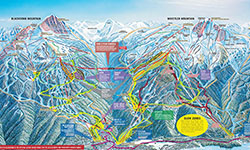 School ski trips can expect challenging moguls and fast meandering routes from summit to Base Lodge (such as the Mens Downhill - try without stopping for a breather!), and also protected gradual descents for the beginners. Due to the sheer expanse of the mountain nobody is left behind.

There are no cars in the resort centre which makes safeguarding easier, and there is plenty going on during the day and at night to keep our pupils happy. In terms of evening entertainment for our school ski trips we have previously pre-booked the more adventurous ziplining, bobsleigh and curling, alongside the more traditional pizzerias, swimming and movie nights.

The Winter Olympics injected heavy investment which begins from the very start. Investing away from rail, the local Province instead built the Sea to Sky Highway that travels from Vancouver to the resort. The views in itself is a feature of our school skiing trips to Whistler so stay awake after the long haul flight!

Our experience with Canada, and Whistler.

Fortunately 321 have staff that have been raised and schooled in British Columbia, Canada - very close to Whistler.

With this local knowledge you can be sure 321ski talks with a certain unique authority about Canadain school ski trips.

If you can't find your answer in our FAQ section please go to 'get in touch' - don't be shy!

321ski is focused on long term trust, not profit margins.

To login, enter your details below: